The Research Institute for Housing America (RIHA) of the Mortgage Bankers Association is a 501(c)(3) trust fund. Its chief purpose is to encourage and aid - through grants and sponsored research to distinguished scholars, educational institutions, research facilities, and government organizations - the pursuit of knowledge of mortgage markets and real estate finance. Learn more

6/30/22
Who Will Buy the Baby Boomers’ Homes When They Leave Them?
America is growing older, driven by the Baby Boomers. Prior to the  COVID-19 pandemic, Boomer homeowners numbered 32 million and represented almost 41% of all homeowners in 2019. The aging and eventual  death of such a large population group may have an important impact on the future housing market, because listings by older homeowners  are an important source of supply of existing homes for sale.

12/21/21
The Distribution of Wealth in America Since 2016
After almost a decade of increasing inequality during the Great Recession and its aftermath (as documented in previous RIHA report, The Distribution of Wealth Since the Great Recession, covering 2007-2016), the distribution of wealth in the United States became somewhat more equal between 2016 and 2019. The average net worth of Americans increased by 1.9 percent during those three years, from $733,000 to $747,000 (both measured in 2019 dollars), while the net worth of the typical household - the family in the middle of the distribution, richer than half and poorer than half - increased by 17.6 percent, from $103,000 to $127,000, the highest it has been since 2007. 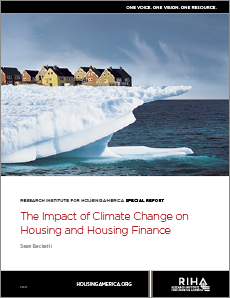 9/23/21
The Impact of Climate Change on Housing and Housing Finance
The Earth's climate is changing. These changes will impact housing and the housing finance industry. Beyond these two certainties, there is a long list of unknowns. What forms will climate change take? How extreme will these changes be? Where will they be most concentrated? And what will be the pace of these changes? Can these changes be reversed or mitigated?

6/29/21
Why Are Older Workers Moving Less While Working Longer?
Since at least the 1990's, older workers' labor force participation (LFP) and migration responses have been trending in opposite directions, counter to conventional wisdom in labor economics. One explanation could be that diverging housing prices across regions suppresses migration, while also prompting more LFP among those homeowners whose housing price appreciation has been perceived as disappointing. This paper probes the relationships between negative labor market shocks, housing wealth changes, and migration by considering how rising import competition had differential impacts across US housing and labor markets after 2001 to compare shocked and unshocked homeowners and renters (in an augmented differences-in-differences-in-differences regression strategy).

3/18/21
The Location of Affordable and Subsidized Rental Housing Across and Within the Largest Cities in the United States
Low and moderate income (LMI) households are an important part of the population served by the housing and mortgage industries. Over the last two decades, house prices and rent appreciation have exceeded growth in earnings for many Americans creating economic obstacles both for renters and prospective first-time homebuyers. Moreover, these changes in purchasing power have varied substantially across metropolitan areas. Cities with recent employment and income growth in areas with significant housing supply constraints have seen the greatest challenges in this regard, especially in the rental market.

12/10/20
The Distribution of Wealth Since the Great Recession
Two things have happened to the wealth of American households since the Great Recession started in 2007. First, the distribution became much more unequal; second, the wealth of the typical family dropped sharply, and, at least through 2016, did not recover. These changes are largely due to the sharp drop in homeownership. From 2007 to 2015, the homeownership rate fell by four and one-half percentage points - over six million families. The proportional decline was similar for all large racial and ethnic categories: White, Black, Hispanic, and "other" (mostly Asian). For the 60 percent of us who comprise the broad middle class, the equity in our homes is still our most valuable asset, and this is true for those of us whose net worth is around $50,000 on up to those of us who are millionaires; but as of 2016 we were typically 30 percent poorer than we were in 2007.

9/17/20
Housing-Related Financial Distress During the Pandemic
The COVID-19 pandemic has had a profound impact on public health and the national economy. In the six-month span from January 2020 to the present, the country has gone from an historically low unemployment rate of 3.6% to an economy in freefall in the spring. With initial federal stimulus measures largely having run their course and a rising wave of COVID cases in June and July in the South and West, for many, hopes for a quick recovery have been dashed. Of concern for the housing and mortgage industries specifically and policy makers more generally is the ability of American families to sustain their monthly payment obligations were the recovery to be protracted.

7/9/18
Quantified Parking: Comprehensive Parking Inventories for Five U.S. Cities
Comprehensive parking inventories have never existed for U.S. cities. Because of this, many parking-related questions have never been answered. This uncertainty - not knowing how much parking there is near a site or in a city - is the motivation for this report. By presenting the first complete parking inventories for five U.S. cities, this research reveals an investment in parking that is out of balance with the current demand for parking in almost all cases, and even less in tune with what appears to be declining future demand.

9/4/17
Managing Mortgage Product Development Risk
Mortgage banking is a highly cyclical business, prone to expansion and contraction as market conditions change. Mortgage product innovation is healthy for the industry and consumer so long as product risks and process quality are well understood. This study provides the industry with a framework for addressing both in an integrated manner. A similar approach is also recommended for evaluating all processes used over the loan lifecycle.

2/6/17
Owned Now Rented Later? Housing Stock Transitions and Market Dynamics
This paper documents and analyzes an overlooked but important feature of housing market dynamics: existing homes shift between owner-occupied and rental status over time in response to changes in the home's attributes and local market conditions. This study examines these shifts using 11 years of data from the 2000-2014 Census and American Community Surveys and the 1985-2013 American Housing Survey panel. Drawing on these two sources of information, several important patterns are brought to light.

8/2/16
The Affordability of Owner-Occupied Housing in the United States: Economic Perspectives
There are many conceptualizations of how to measure housing affordability and there are many affordability indexes. All measures are based on judgments of which components of housing costs should be included and judgments about when these costs should be considered excessive. This study reviews existing theory and empirical work about the affordability of owner-occupied housing. It concludes that only a few affordability indexes are well grounded in economic theory, although all contain ad hoc assumptions. One commonly made judgment is that a household's housing cost should be compared with its income, although alternative comparisons such as with housing construction costs have been proposed. Another conclusion reached is that an affordability index should measure the full cost of housing faced by the homeowner.

5/3/16
Diverted Homeowners, the Rental Crisis and Foregone Household Formation
Much has been written already about the housing crisis that precipitated the Great Recession. Among the long-term impacts have been the emergence of a rental housing shortage and an intensified affordability crisis in the rental market. This report analyzes various supply and demand factors that have led to this crisis. In so doing, it provides detailed analysis of the shifts in homeowner and rental demand.

3/23/16
Cognition and the Housing Behavior of Older Americans
America is aging. As the Baby Boom begins to enter retirement years, new challenges are arising with significant implications for both borrowers and lenders. In particular, given the impact of aging on memory and other cognitive skills, there is a need to consider the implication for financial decisions made by older individuals. By the time individuals are arriving into traditional retirement ages, when many important financial decisions are made, cognitive skills are already in decline as part of normal cognitive aging. This report finds a strong correlation between housing behavior and the cognitive decline of older Americans. Importantly, normal cognitive aging also correlates to a potential borrower's ability to make decisions relating to their own housing and financial situation.